According to Professor Richard Wiseman – one the of the most brilliant and widely quoted of UK psychology writers – sceptic and debunker of pseudo-science nonsense (and a brilliant illusionist too by the way) – the foundations of brainstorming are shaky ones, to say the least

We’ve all been there: The plastic cups. The marker pens with more squeak than ink. That white board with the shadowy phrases of  projects long forgotten, still ghostly visible. The sticky notes. The giant pads of paper. Blu-tak. So, is brainstorming really any good? Professor Richard Wiseman thinks maybe not..

Recently the Daily Telegraph delighted in revealing some of the Foreign Office’s management claptrap surrounding their planning for the Pope’s visit to Britain.  ” Brainstorming, a group creative activity invented in the 1950s, is supposed to generate a large number of ideas for the solution to a problem, though research has shown it is actually less effective than individuals working independently. As the Papal Visit Team has demonstrated in spectacular fashion, it is possible to have lots of ideas and for everyone of them to be fatuous.“ And according to Professor Richard Wiseman – the UK’s only Professor for the Public Understanding of Psychology and one the of the most brilliant and widely published sceptics and debunker of pseudo-science nonsense (and a brilliant illusionist too by the way) – the foundations of brainstorming are shaky ones, to say the least. His great book – ’59 Seconds – Think A Little Change A Lot’ is a brilliant exploration of that mysterious place where business school speak, popular belief and the self development industry comes dangerously close to … err, quackery. The book critiques many of the holy-cows; persuasion, self esteem, personality tests, stress management. And  a nod of recognition from many in marketing depts around the globe. Of course, there is an awful lot of good stuff around. In good project management, good personal psychology, good salesmanship, good self management and good self awareness. I have found  Dale Carnegie, NLP, Mark McCormack – useful friends over the years. But Wiseman led me to review this whole area of brainstorming and ‘group think’ in more detail. Mea culpa? Perhaps. I have been known, from time to time, to dabble in brainstorms. I was young. I was impressionable and only wanted to try it once – then it became a habit. Brainstorming. Its what we did in campaign land. Its part of the lexicon. Part of the toolbox. Part of the old toolbox. So where did this whole notion of brainstorming come from? Why does it have such reverence in business despite its academic failings? Brainstorming was thought to have been originated by Alex Faickney Osborn in the 1950’s. Dictionary.com defines it as; ” a conference technique of solving specific problems, amassing information, stimulating creative thinking, developing new ideas, etc., by unrestrained and spontaneous participation in discussion.” Which sounds good. The idea of course is to encourage free thinking and get as many divergent ideas out as quickly as possible before expanding the analysis and then converging to the right solution. It is groupthink – but in a creative way. It has rules and processes (that I will not expound upon here but can be seen in the diagram below) – and of course it has been a technique popularised in schools, colleges and businesses as something that encourages quality creativity and decision-making. Afterwards, the group generally feels good, that they have created the best solution –

collectively. But there is a problem. When examined properly as a technique – it is consistently proven ineffective. As Wiseman says ” In the vast majority of experiments, the participants working on their own produced a higher quality and quantity of ideas than those working in groups.” This is often because groups tend to be less hard-working and productive than people think. Something termed ‘social loafing’ – meaning everyone actually performs slightly less because they are in the group. Ah, but what about creativity? Surely all those sticky notes and excited eureka moments are building the most creative solutions though? Well, no. ” Ask them to come up with ideas and people are more creative away from the crowd. It is a universal phenomenon emerging in work across the world, including America, India, Thailand and Japan. In short – for seventy years, people have been using brainstorming to stifle not stimulating their creative juices”. And just because a group comes to a decision and even a bold one – does not mean that it is the best course of action either. A lot of the research shows that brainstorming creates as many problems as it solves.  As Wiseman points out ” Studies have shown that, compared to individuals, groups tend to be more dogmatic, better able to justify irrational decisions, … see their actions as highly moral and have a tendency to form stereotypical views of outsiders. In addition strong willed people who lead group discussions can pressurise others into conforming, self-censorship and create an illusion of unanimity” . In other words – the collectivist and careful rules of the brainstorming session may create polarisation. ” Over 50 years of research shows that people often reach irrational decisions in groups … and highly biased assessments of the situation.” – says Wiseman. Looking back, I can see that properly briefing ONE talented individual and asking them to come back with three ideas in a few days, was just as effective as dusting off the whiteboard and getting a whole gang, their extended family and a few pets involved. Often an individual or a small working duo, properly briefed is the most creative and productive.  It works in song-writing. It works in movie making. And in the best agency creative/service teams. And in production teams and projects. The best  teams I have worked in did not conduct brainstorms. It was a case of ‘you’re the specialists, here is the problem – go away, come back with some recommendations – and speak to so and so’. Sometimes you discussed your initial idea with one specialist and then refined it over a cup of coffee with another. But this was a quicker and better way to get a good solution than having rounds of brainstorming meetings consuming hours of time and lots of pens and blu-tak. Group briefings? Helpful. Work In Progress meetings? Of course. Team planning? Justified. Brainstorming sessions? I’m not so sure anymore.  But I’m going to get the whiteboard cleaned and the check the supplies of big pads of paper because I may need to run a brainstorm to make sure. Now, where is that blu-tak.. 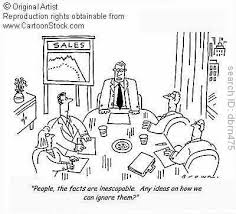 4 thoughts on “Business Myth #1. Is Brainstorming Really Any Good?”